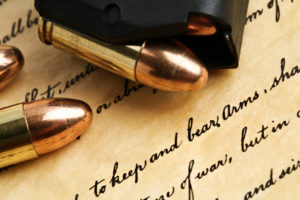 A lot of times when people ask me about unjust legal results, they ask, “Isn’t that unconstitutional?” Or, “How can that be fair?”
If the answer was just answering a law school exam, I’d write out the pros and cons of the constitutionality of a law.
As for fairness, the law like life is often not fair.
The least fair part of the legal system involves the expense of defending your rights. If you think you have a right but don’t have money to defend that right, well then, you have nothing.
You may think have a legal right to do something, but if you are prosecuted for a crime, it costs money to hire a defense attorney and all the expenses in defending your case.
Those who tend to have more money for quality legal representation have the best chance at a good result. That’s just how it tends to be.
Because of the serious nature of what can happen with guns, there can be a very high cost to defend gun rights. When the police arrive at a shooting situation, they usually don’t know anything about you as a person. Their initial response tends to not favor the person who decided to use deadly force.
The following is a great comment that was left by “Jim” who commented on a my blog post involving a CHL holder who used a gun to defend himself against a group of men charging towards him but was found guilty. (The case was appealed and retried with other counsel). I thought the comment was smart enough that it was worth putting in its own post. I don’t agree with every aspect of it, but it is a perspective worth sharing:

“I’m a firearms enthusiast, CHL holder, certified instructor, dealer and occasionally a competitor. As you can imagine, this situation interests me greatly.

I get a lot of training and I’m certified to train others, but there is no way for training to cover every scenario. This is one of the “gray area” cases that we all hate. I don’t know enough about the details to draw a specific conclusion on a case like this; even the jurors, who heard excrutiating details, weren’t actually present and can’t know the emotions of the situation. In this case, emotions are a key factor: was the shooter afraid or angry? The answer can determine his guilt.

One of the things that good trainers talk about is the price of lawful self defense. As a rule of thumb, the first bullet you fire at a human being will cost $20-50,000 in legal fees (criminal and civil) — assuming the law is on your side. The cost of rightful self defense can be so high that avoiding confrontation whenever possible simply makes the most sense. People who read the law but don’t realize the cost of being right often underestimate how bad it can get or how hard they should try to avoid having to prove they were right.

You may have a legal right to stand your ground, but that won’t stop you from spending your life savings proving you were within your rights.

The legal protections afforded for self defense are intended to protect people who are trying to defend their lives. However, their applicability is determined by human beings applying their personal judgment so their boundaries are not as clearly distinct in practice as they are on paper. Most of us are probably better off only having a general sense of these laws rather than knowing their details, as it is a terrible mistake to rely upon the details of the law (stand your ground, fear of harm, etc.) rather than the general principal of self defense (avoid confrontation whenever possible and defend yourself when you can no longer avoid it.)

One of the things I’ve learned in training is this: never fire a gun unless you are prepared to go to jail. There is an old saying: better to be tried by twelve than carried by six. Firing a gun is a last-ditch effort to protect your life. Going to jail is better than dying, but if you assume you will go to jail when you pull the trigger and you are willing to do it anyway, that is a good indication that you are in genuine fear for your life.

It is always important to remember that no one wins a violent confrontation; there are only differing degrees of loss. The best you can hope to take away from a violent confrontation is the same that you brought into it — your life, health and wealth. Unfortunately, you are likely to lose at least some of these regardless of the circumstances.

I appreciate Jim’s comments on this. Avoiding confrontation isn’t always possible or popular but if you want to save your money and your freedom, it is often the best recourse.
Ultimately, a lot of times in fights, whether it involves guns or not, guilt and innocence has less to do with what the often confusing legal standard is and more to do with who got hurt worse and who is perceived as the better citizen by jurors who don’t really know the people involved in the situation.
It is easy for things to get out of control, particularly if there is alcohol involved. Whether the shooters emotion was angry or scared at the moment that self-defense is used isn’t a part of the legal standard but sometimes juries can infer things from it.
Often in fight situations, it is hard for the police to figure out who did what, so it is important to hire legal counsel early to help be your voice. Sometimes attorneys can resolve these issues prior to charges being filed or at the Grand Jury part of the process.

wpDiscuz
2
0
Would love your thoughts, please comment.x
()
x
| Reply
You are going to send email to
Move Comment