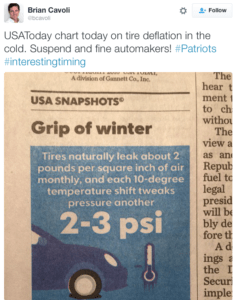 Sports Illustrated writer, Peter King in his MMQB column made the case that Roger Goodell should give the Patriots draft picks back but likely won’t. I agree with his conclusion.
However, I think there is a much stronger case to be made of why the Patriots draft picks should be restored:
No Evidence of Ball Tampering. No evidence exists that Tom Brady or anyone from the Patriots wanted balls deflated outside of the ranges dictated by the rules.
None. Zero. Nothing in thousands of pages of documents or testimony or found anywhere in the known universe.
In his hearing with Judge Berman, the attorney for the NFL danced around this issue and didn’t answer it directly (pg 19):

The short, clear answer to the Court’s question is no. The Wells Report and the NFL attorneys try to manufacture a “circumstantial evidence” case of ball tampering but acknowledge they have no direct evidence of that.
No “Circumstantial Evidence” Case. Even the “circumstantial” evidence case of tampering the day of the AFC Championship Game is bizarre. This isn’t like fingerprints on a murder weapon kind of evidence.
That is, the NFL doesn’t have any evidence that anything happened at all other than the NFL didn’t realize balls deflate in cold weather. But if you did think something shady happened, um well, here are some old, random texts that do not refer to PSI out of normal limits, a guy taking a brief bathroom break before the game, things that happen in every locker room like a star QB signing lots of autographs and not knowing everyone’s full name, and a strange non-cooperation claim.
The NFL references gameday ball “protocol” being broken, but the best evidence from both the Patriots and NFL suggests that the NFL really didn’t really have a consistent protocol involving the balls pregame, and had never really cared about this issue until this was turned into a -gate.
Ultimately, the “circumstantial evidence” case appears to be an extreme, paranoid reaching for a particular result.
Ample Evidence of No Ball Tampering. Of the evidence that actually exists, there is plenty of evidence that no ball tampering occurred:
Natural causes. Footballs naturally deflate when the weather is cold. NFL officials when they first accused the Patriots of cheating had zero idea about the ideal gas law.
Direct testimony. Tom Brady, under oath testified that he didn’t know of ball tampering, direct it, or do anything wrong. That he didn’t want the footballs messed with in any way after he approved them before the game.
This viewpoint makes more football sense versus a part time locker room attendant hurriedly taking air out of footballs imprecisely after the balls were approved by the QB. Both locker room attendant Jim McNally and equipment manager John Jastremski denied doing anything wrong in repeated interviews.
Testimony is actual evidence that the NFL obviously didn’t believe for reasons I do not understand, but it is direct evidence.
Text messages that support rule following. Remember, there is no evidence from any source that Brady preferred balls outside of the 12.5-13.5 PSI as permitted by rules. There’s a series of text messages demonstrating that Brady was alarmed when someone significantly over-inflated footballs to 16 PSI during a Jets road game. The texts between McNally and Jastremski presume it was the referees.
Remarkably, the Wells Report includes a text exchange between Jastremski and his fiancée which is the only independent evidence referencing what PSI Brady preferred for his footballs. (pg 90) There is no reason why Jastremski would lie to his fiancée about the balls needing to be at 13:


(Please feel free to leave relevant legal questions and comments below. I like to help further polite discussion because I think reason and logic can be more persuasive than yelling at clouds. Yes, reason and logic often fails in the face of indifferent-to-malicious uses of power, but I have found sometimes it actually changes things. Note: I do know that there are other arguments that are in support of my position, but this is already way too long, and you are probably bored about this too. Sorry. Also, I prefer for you not to use profanity or rude words about any individuals involved in this matter. I know this is an angering topic but I don’t want that ish on my blog. If you don’t follow my kind request, as the sole moderator here, I reserve the right not to publish such comments. My blog, my rules. Thanks).

wpDiscuz
69
0
Would love your thoughts, please comment.x
()
x
| Reply
You are going to send email to
Move Comment