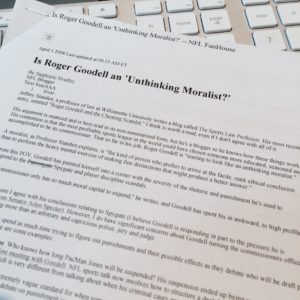 This blog post is a bit back to the future.
Harsh, arbitrary punishments combined with no concern for fair process means that the cycle will repeat with different topics, names, processes, teams.
We will hear the headline version of events given to us by the NFL. The people investigated often cannot defend themselves publicly due to pending litigation and fears that speaking out will anger the commissioner more and be seen as lies and obstruction. Confession and remorse are often required by Goodell, and is not an option for those who maintain actual innocence.
Unfair process means that fans often don’t hear anything close to the real truth about a controversy. And we know that the process is unfair because there is no reasoned way for a targeted player, staff member, team to maintain a claim of actual innocence.
After the Brady case is done, the NFL will likely tweak their processes without looking at their overall philosophy of punishment. And the cycle will continue. 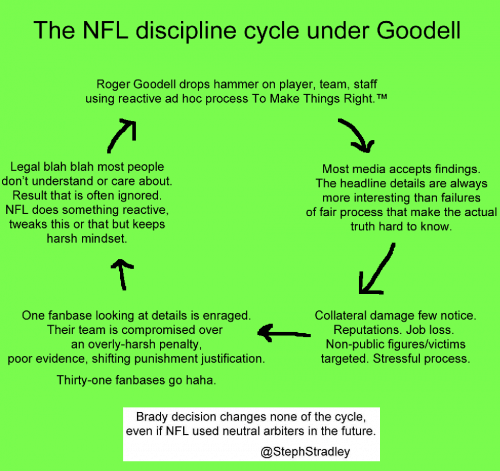 Please note: These comments below are moderated by me. I know people are angry about this subject, but I’d prefer no personal attacks of people and a focus on NFL discipline system issue questions and answers.