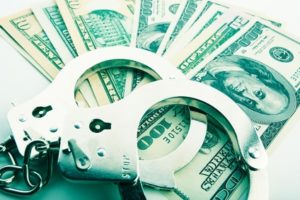 One way that politicians on both sides of the aisle get elected is being “tough on crime.” Nobody wants to take laws off the books that make them look soft.
If there’s a high profile bad act that happens, the first action is a politician grandstanding to fight that evil with a new law. There’s also big money lobbying interests who want to criminalize acts against their businesses. That protects businesses, but taxpayers end up paying for this enforcement service.
Problem is more laws mean more money. Money to prosecute those cases and to have judges hear them. Money to investigate those cases. Money to warehouse criminals in jail. The problem of the increases in Federalization of crime isn’t a recent point of view. Advisor to President Reagan, Edwin Meese wrote about this issue in 1999 in a Wall Street Journal article called, “The Dangerous Federalization of Crime:”

Following a two-year study by experts in all segments of the criminal justice process, the [American Bar Association] task force documented the explosive growth of federal criminal law, including the startling fact that more than 40 percent of the federal criminal provisions enacted since the Civil War became law in just the past three decades. Most troubling is the high percentage of these federal crimes that duplicate state laws that have been on the books for years. This endangers the constitutional principle of decentralized law enforcement authority that has worked well in America and that has been a bulwark against the centralization of police power at the national level.

And nothing has been done about this. Look at the numbers listed in this interesting Reason.com article, “Washington’s Biggest Crime Problem:”
1981 – 20,000 Federal prisoners; 1989 – 53,000 Federal prisoners; 2004 – about 171,000 [According to the Federal Bureau of Prisons website, the number in 2011 now roughly 218,000 Federal prisoners with over 38,000 employees] In 2001, about 10% of people in Federal detention had committed violent crimes.
1981 – 1500 Federal prosecutors; 2004 – over 7000 Federal prosecutors
It’s not just new laws that are at issue. It is also the broad interpretation that the Department of Justice wants to use to interpret current laws. A recent example that made me think of this is the DoJ wanting to be able to use website’s “Terms of Service” as the basis of criminal charges under the Computer Fraud and Abuse Act.
What does that means in simple terms? The DoJ in its tremendous discretion could make it a Federal crime for you to lie about yourself on the internet or any number of things that are violations of “terms of service” that you’ve likely not read. Interested in this subject? Read: Professor Owen C. Kerr’s testimony on the threat to civil liberties of the DoJ’s reading of the CFAA [pdf].
We can’t afford this. And yet nobody will likely do anything about it because no politician wants to be painted as soft on crime.