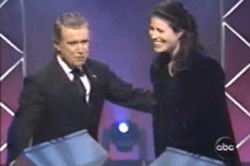 The syndicated version of Who Wants To Be A Millionaire is coming to Houston on Monday to audition contestants.  I participated in auditions in Houston almost 11 years ago, got the call to be on the show, won $64,000 (minus way too many taxes).
I ended up doing this because my very cool mother-in-law encouraged me to try out. The show experience was one of the most surreal things that has ever happened in my life.
I’ve helped other people get on the show since then, and thought I’d share some Who Wants To Be A Millionaire audition tips.

Good Luck, Have Fun, and Breathe

Please let me know if you have any additional questions or suggestions.
I was on the show because my mother-in-law saw the article in the Houston Chronicle and insisted I go the next day. Wrote an overly-long piece on my WWTBAM show experience here. It’s a longshot to get on the program, but I did it, and got my best friend to do it too. So it isn’t impossible unless you don’t try.
If you get chosen to be on the show, let me know and I can give you some additional advice.

wpDiscuz
13
0
Would love your thoughts, please comment.x
()
x
| Reply
You are going to send email to
Move Comment