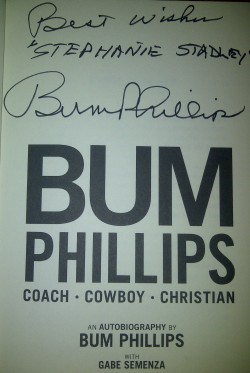 I’ve been catching up on my summer reading, and very much want to recommend the autobiography, “Bum Phillips: Coach, Cowboy, Christian.”
It’s a quick read, and something worth sharing with your pre-teens, teenagers too. He would likely be embarrassed by folks saying this, but he has lived a very very badass life beyond just the Houston Oilers stuff. I also love how earnest it is in a time when earnest isn’t always appreciated.

From growing up in East Texas during the Great Depression
His Marine times in the Pacific during World War II
Texas high school, college and NFL coaching, and the beginnings and history of modern football coaching, thoughts on leadership
The Luv Ya Blue phenomenon
His family life and retirement
And how he became closer to God in his later life
I know some folks aren’t comfortable about people talking about religion. He makes a point about how he doesn’t want to shove it down people’s throats, but he feels the need to mention it given the importance in his life. I’ve mentioned before that some folks are putting an opera together based on this book. I’m not sure how that’s going to be done but his life is certainly operatic in scope–you could picture a lot of this in your head like a movie. (Confession: I cried in parts).

Who Should Read This Book.

The book is written from the perspective of someone who has lived a very full, often difficult life. I thought I knew about his story, but I was surprised.
Solid read for:
Houston football fans
People interested in little-known information football history
Business people interested in leadership, family lessons
If you just like reading interesting, inspiring, true stories
As I mentioned, appropriate for pre-teens, teens
Purchased by churches to re-sell to congregations
I thought this would be the sort of book I’d like, but I was surprised how much I enjoyed it.

Proceeds from the sale of this book go to the Bum Phillips Charities (He explains the charities more in the book. Very inspirational). Updated: Here is the new link to purchase his book.
It makes a great gift for people.