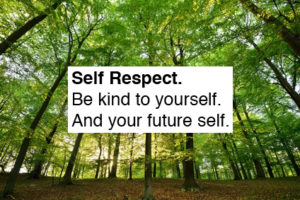 You likely know people who tend to beat themselves up a lot. Maybe that’s you. Think everyone does it to some degree, but it’s destructive when it becomes a habit not even noticed.
And what I want to say is this:
Self-respect is being kind to yourself and your future self.
Being kind to yourself, in that the things you say to yourself should never be harsher than what a good and kind and true friend would say. And kind friends forgive after people make inevitable mistakes.
Being kind to your future self, in that the things you do now, should help and not harm you in the future.
Self-respect doesn’t mean self-involved, or only looking out for your own interests. Because certainly being overly self-involved isn’t in anyone’s short or long term interests unless you enjoy being perceived as an ass.
When you go through life, ask whether the things you do are unkind to you or the future you. Make this a daily intentional choice. See if you can do big and little things to help yourself. Often those things will, by their nature, help other people too.
It can be a big thing like saving money for a future big purchase instead of unthinkingly getting further in to debt.
And can be a small thing like setting the coffee maker before you go to bed so you wake up to a great smelling fresh pot of coffee.
Catch yourself in moments of self-respect, “I am being kind to myself or my future self.” Game it, and think of different ways to be kind to yourself during the course of your day.
Sometimes, people use intoxicants to feel happy right now, and/or to quiet anxious voices in their head. But it has been said that excess alcohol steals tomorrow’s happiness for today. I don’t know who said that, but it is likely someone who gets killer hangovers.
The notion of helping yourself with deferred gratification doesn’t sound very fun. And I think the trick to it is to make sure that when you are taking care of the future you, it also includes the near future you too. But when you make choices that aren’t good for you, not to beat yourself up too much.
Wrote this down because some of the folks who find this blog are having rough times in their lives and may need of a reminder to be kind to themselves. Sorry you are going through this. And if you are not, high five.
(I started thinking about this some while trying to figure out Matthew McConaughey’s widely-panned Oscar speech thanking his future self for being his hero. Not quite the same concept but similar. Make your future self thank you too.)